The King's Evil (2019) is a murder mystery, in the setting of London in 1667, by award winning British author Andrew Taylor. I enjoyed this novel and recommend it for your reading list. Click on the links to learn more about the author and his books.

Andrew Taylor has been a full-time writer since 1981, and has written over twenty books. He has been described by The Times as 'One of Britain's best writers of psychological suspense.'

Having decided to become a writer at the age of ten, he claims that it was his newly recognised facility for writing stories, teamed with the idea that a writer's life consisted of not wearing a tie to work, that first attracted him to the career. It was the discovery of Sherlock Holmes at the tender of age of eight and earlier yet with Enid Blyton's Hurrah for Little Noddy, that his love for crime novels was incited. 'Another thing I like about crime fiction' he asserts, 'is its lack of pretension. It sets out to entertain – it's fiction with its sleeves rolled up.'

In the years preceding Andrew Taylor's breakthrough in the literary world, he worked as a boat-builder, wages clerk, teacher, librarian, labourer and freelance publisher's editor. Since then, Public Lending Right estimates place his British public library readership in the top one per cent.

His novels include the Dougal and Lydmouth crime series, the psychological thriller The Barred Window and his ground-breaking Roth Trilogy, now published in one volume as Requiem for an Angel. He also reviews and writes about crime fiction, particularly in the Independent. Awards received for his books include the John Creasey Memorial award from the Crime Writer's Association and an Edgar Scroll from the Mystery Writers of America, both for Caroline Minuscule, and the CWA's Ellis Peters Historical Dagger. The Roth Trilogy was adapted into acclaimed ITV drama Fallen Angel. The American Boy was a 2005 Richard & Judy Book Club choice.

He lives in the Forest of Dean with his wife, a photographer, and their two children.

Goodreads Review of The King's Evil

From the No.1 bestselling author of The Ashes of London and The Fire Court comes the next book in the phenomenally successful series following James Marwood.

A royal scandal that could change the face of England forever…

London 1667. In the Court of Charles II, it’s a dangerous time to be alive – a wrong move may lead to disgrace, exile or death. The discovery of a body at Clarendon House, the palatial home of one of the highest courtiers in the land, could therefore have catastrophic consequences.

James Marwood, a traitor’s son, is ordered to cover up the murder. But the dead man is Edward Alderley, the cousin of one of Marwood’s acquaintances. Cat Lovett had every reason to want her cousin dead. Since his murder, she has vanished, and all the evidence points to her as the killer.

Marwood is determined to clear Cat’s name and discover who really killed Alderley. But time is running out for everyone. If he makes a mistake, it could threaten not only the government but the King himself… 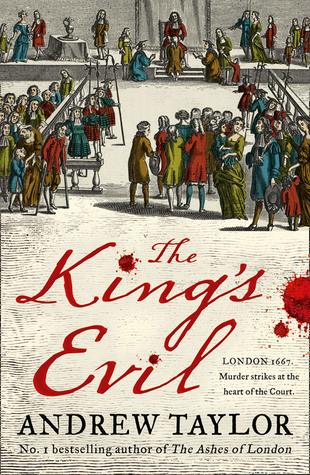 Publication Order of Bergerac Series (as by Andrew Saville) Books

Bergerac and the Fatal Weakness (1988)

Hi Roy... despite the fact that this is a prolific author, it's not one whose name is familiar to me.

You may wish to try this four book series.

Hi Roy,  Thanks for another great book recommendation.  My daughter and wife have read some of Andrew Taylor's books.  They are still on my to read list.

looking at the number of books he has written, he sure is busy.

The King's Evil sounds like a great read for murder mystery fans, Roy!

Sounds like a wonderful read.  I was distracted by your magnificent photo of the orchid. A