Red Bones (2009) is book number three in the Shetland Island series featuring Detective Jimmy Perez by bestselling English crime writer Ann Cleeves. I enjoyed this novel and recommend this series for your reading list. Click on the links to learn more about the author and her books.

An island shrouded in mist and a community with secrets buried in the past . . .

When a young archaeologist studying on a site at Whalsay discovers a set of human remains, the island settlers are intrigued. Is it an ancient find - or a more contemporary mystery?

Then an elderly woman is shot in a tragic accident in the middle of the night. Shetland detective Jimmy Perez is called in by her grandson - his own colleague, Sandy Wilson.

The sparse landscape and the emptiness of the sea have bred a fierce and secretive people. Mima Wilson was a recluse. She had her land, her pride and her family. As Jimmy looks to the islanders for answers, he finds instead two feuding families whose envy, greed and bitterness have lasted generations.

Surrounded by people he doesn't know and in unfamiliar territory, Jimmy finds himself out of his depth. Then there's another death and, as the spring weather shrouds the island in claustrophobic mists, Jimmy must dig up old secrets to stop a new killer from striking again . . . 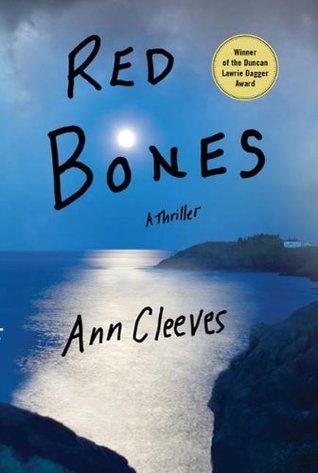 Good morning Roy. So much fiction. So little time. Read on my friend. Enjoy your day!

Good morning, Roy... Ann Cleeves knows how to weave a story that captures you from the first page and keeps you there till the last.

Ann Cleeve's "Red Bones" sounds like a great read for detective bookworms out there, Roy.

This is an interesting book I might have to check out. Thank you for sharing Roy!

Thank you for your wonderful suggestion.  It is now on our list.  Wishing you a great rest of the day...I have already put in a day's work started at 4:00 AM, and I am going to keep going until dinner time.  A

Hi Roy,  This sounds like  a fantastic read.  Apparently, my wife has read the first book in this series.  She's planning on reading more - maybe I'll check it out as well.

Thank you very much for your feedback. It is always good to hear from you.