Bloodstream (1998) is a medical suspense novel by The New York Times bestselling American author and Maine resident Dr. Tess Gerritsen. I enjoyed this book and recommend it for your reading list. Click on the links to learn more about the author and her books.

Internationally bestselling author Tess Gerritsen took an unusual route to a writing career. A graduate of Stanford University, Tess went on to medical school at the University of California, San Francisco, where she was awarded her M.D.

While on maternity leave from her work as a physician, she began to write fiction. In 1987, her first novel was published. Call After Midnight, a romantic thriller, was followed by eight more romantic suspense novels. She also wrote a screenplay, “Adrift”, which aired as a 1993 CBS Movie of the Week starring Kate Jackson.

With her acclaimed novels "Harvest" and "Life Support", New York Times bestselling author Tess Gerritsen has injected a new dose of adrenaline into the medical thriller. Of "Harvest", Michael Palmer declared: "Only a riveting storyteller who is also a physician could have written this book." Now, Gerritsen again weaves frighteningly realistic medical detail into heart-stopping suspense, as a small-town doctor races to unravel the roots of a violent epidemic -- before it destroys everything she loves. Lapped by he gentle waters of Locust Lake, the small resort town of Tranquility, Maine, seems like the perfect spot for Dr. Claire Elliot to shelter her adolescent son, Noah, from the distractions of the big city, and the lingering memory of his father's death. She's also hopeful that she can earn the trust of the town as she builds a new practice. But all her plans unravel with the news of a shocking incident: a teenage boy under her care has committed an appalling act of violence.

Claire has stopped prescribing a controversial drug to the troubled boy, a decision that some in town now second-guess. But before she can defend herself, a rash of new teenage violence erupts in Tranquility, forcing Claire to perform increasingly risky emergency procedures. And when one of her patients dies, the town's panic turns to fury.

Shaken by accusations, and fearful that Noah is now at risk, Claire desperately searches for a medical cause behind the murderous epidemic. She begins to suspect that the placid waters of Locust lake conceal a disturbing history -- and an insidiously lethal danger. But while Claire races to save the town -- and her son -- from harm, she discovers an even greater threat: a shocking conspiracy to manipulate nature, and turn innocents to slaughter.

Woven with the kind of action and detail only a doctor could deliver, and propelled by an expert sense of small-town terror, "Bloodstream" is Tess Gerritsen's most unforgettable thriller yet. 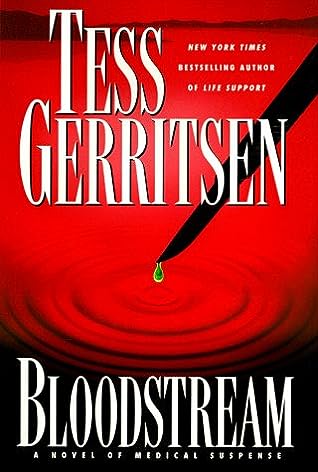 Good morning Roy. Your reading treadmill continues moving at a high rate of speeed. Enjoy your next book.

Good morning, Roy... this sounds like an exciting story that would be hard to put down once you start reading.

Hi Roy, I'm not reading a good book right now, but hopefully I'll carve out some time in 2020 to catch up on the growing list of Roy Recommended books.

What an intriguing story you shared with us.  I will definitely put this one on the list.  A

Bloodstream sounds like a good read for medical suspense book readers out there, Roy

Hi Roy,  Thanks for another book recommendation.  Bloodstream sounds like an intriguing book.  It'll go on my list.

Your comments are always welcome and are very much appreciated.